Refugees Rights in Marriage and Divorce in Turkey 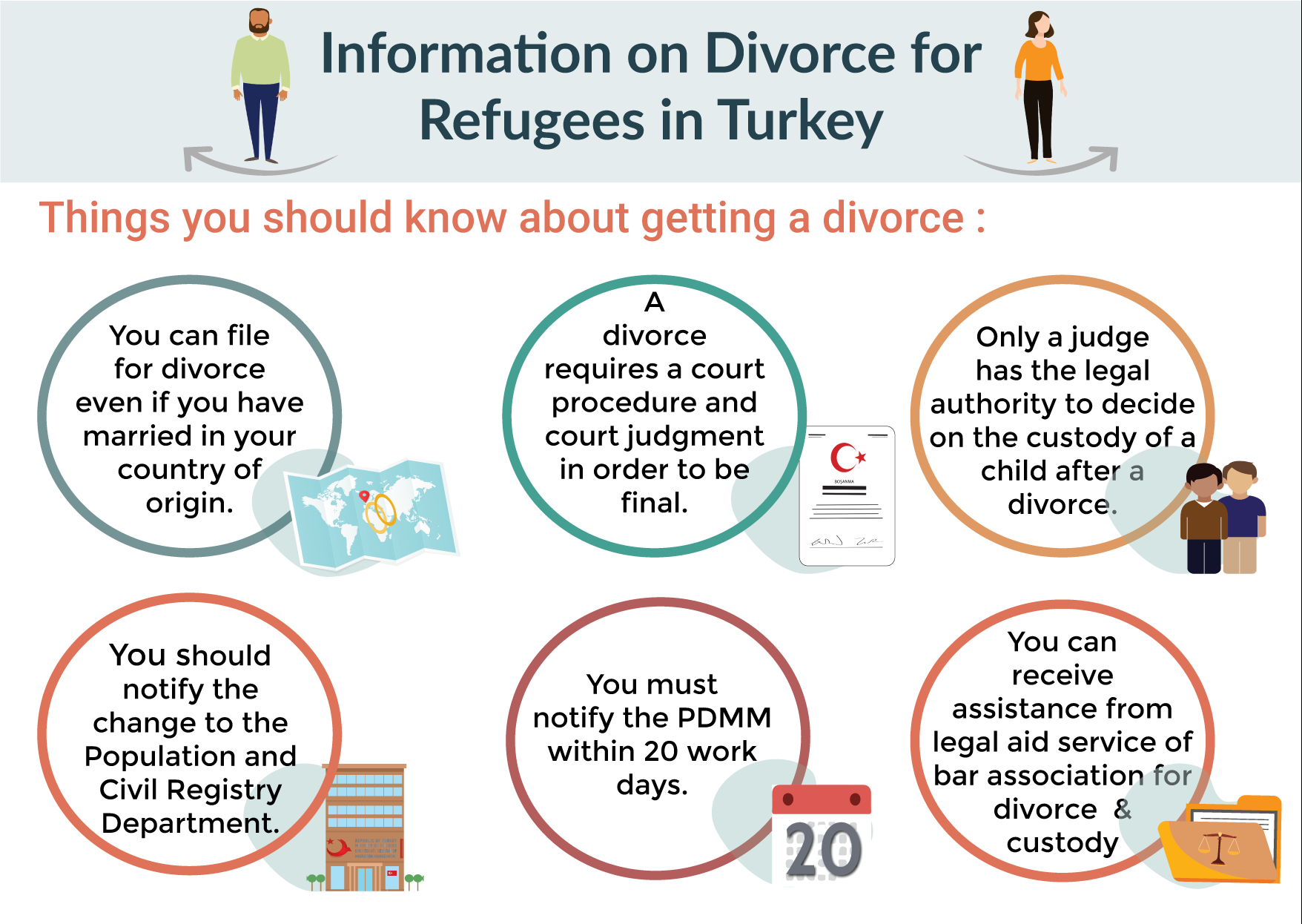 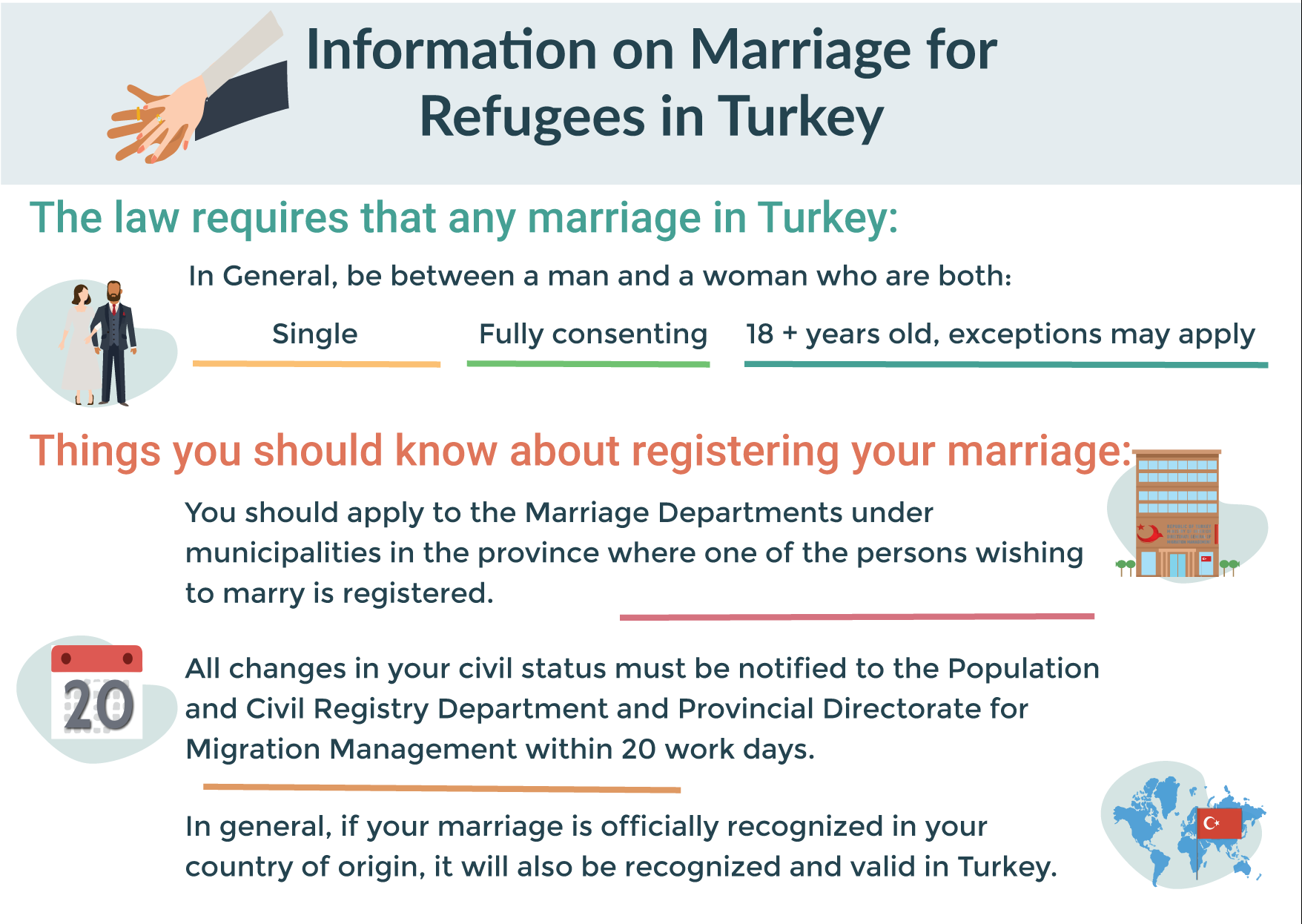 I am seeking protection in Turkey. Can I marry in Turkey?

International protection applicants, international protection status holders and persons under temporary protection have the right to marry in Turkey if they have completed their registration with the General Directorate of Migration Management. Marriage and all other related proceedings are subject to the Turkish Civil Code and other applicable legislation.

What is a civil marriage?

An official or civil marriage is a form of marriage which must be performed by legally designated officials in accordance with the law. Please be aware that although religious or customary marriage ceremonies are allowed in Turkey, they are not legally binding.

What are the conditions for civil marriages in Turkey?

In Turkey, a marriage ceremony can be performed between a freely and fully consenting man and woman. Persons wishing to marry must be bachelor at the time they apply for the marriage. In Turkey, the legal age for marriage is 18. Persons who have turned 17 can marry when there is parental consent or an approval of their legal guardians; under exceptional circumstances, persons who turned 16 may be granted a permission to marry by the court.

I meet the above conditions and want to marry in Turkey. Where should I apply?

Which documents are required for application? Where can I obtain these documents?

The safest way is to approach the Marriage Department and ask for a full list of required documents. However, you will typically be required to present the following: the petition of marriage, identity documents, health reports, passport-size photographs, and the certificate of celibacy. If you have an official document issued by the authorities of your country of origin showing your civil status, it is important to present this document as well. However, persons who do not have such documents may apply to the Provincial Directorate of Migration Management and obtain a certificate of celibacy.

Please also make sure you have an official identity document issued by the General Directorate of Migration Management at the time of application.

Which forms of marriage are legally binding in Turkey? Who can perform a marriage ceremony in Turkey?

As stated above, only a civil marriage performed in accordance with the law and by legally designated officials is valid in Turkey.

I am already married in my country of origin. Is this marriage considered valid in Turkey?

I married in Turkey. Should I notify the authorities?

All changes in your civil status must be notified to the Population and Civil Registry Department and Provincial Directorate of Migration Management within 20 work days.

There is an entry error on my civil status in the identity document issued to me by the General Directorate of Migration Management. What should I do for correction?

For all entry errors in your identity document, you must apply to the Provincial Directorate of Migration Management. If you have a document in proof of your civil status, please also present this document at the time of application.

How can I register my new born?

For birth registration, you should apply to the Population and Civil Registry Department latest within 30 days after the birth. Please be aware that there is no difference between a birth in marriage and a birth outside of marriage, and this shall have no adverse effect on either the child or on either of the parents.

If the birth has taken place in a health institution, officials of this institution may also notify the birth to the relevant authorities. But it is still important to make sure that the notification has been duly made. However, if the birth has taken place in another setting, you may also make the notification based on your oral statement. In such cases, authorities have the right to initiate an investigation to verify your statement. In addition, it is important to register your newborn with the Provincial Directorate of Migration Management.

I want to file for divorce. What should I do?

In Turkey, dissolution of a marriage can only be decided by the court. If you want to file for divorce, you should apply to the relevant competent court and submit a divorce petition. Benefiting from the assistance of a lawyer can be highly critical in this procedure. Please be aware that if you would like to receive legal assistance or counselling from a lawyer, you will be required to pay lawyer’s fee and in addition you may be required to pay possible court fees.

However, if you are unable to afford a lawyer’s fee, you may approach the bar association in the province where you are registered and request legal aid. A bar association is the professional public body of lawyers. Under each bar association, there is a Legal Aid Bureau established to provide free-of-charge legal aid and assistance services to persons who cannot afford lawyer and court fees. All persons seeking international protection, persons having an international protection status, persons under temporary protection as well as stateless individuals are entitled to benefit from the services of Legal Aid Bureaus in Turkey. You are, however, required to make an application and provide several documents explaining and/or in proof of your demand. For a detailed information, please contact the local bar association in the province where you are registered.

I married outside of Turkey. Can I still file for divorce in Turkey?

Yes, you can file for divorce in Turkey even if you have married in your country of origin. However, please be aware that divorce procedures will be subject to Turkish law.

My spouse is not in Turkey. Can I file for divorce?

Who will get the custody of my child or of my children after divorce?

In Turkey, only a judge has the legal authority to decide on the custody of a child after a divorce. The judge will therefore either order joint custody or award sole custody to one of the parents.

I am already divorced. Should I notify the authorities?

Since this is also a change in your civil status, as stated above, you should notify this change to the Population and Civil Registry Department and Provincial Directorate of Migration Management within 20 work days.

I am divorced. Can I re-marry?